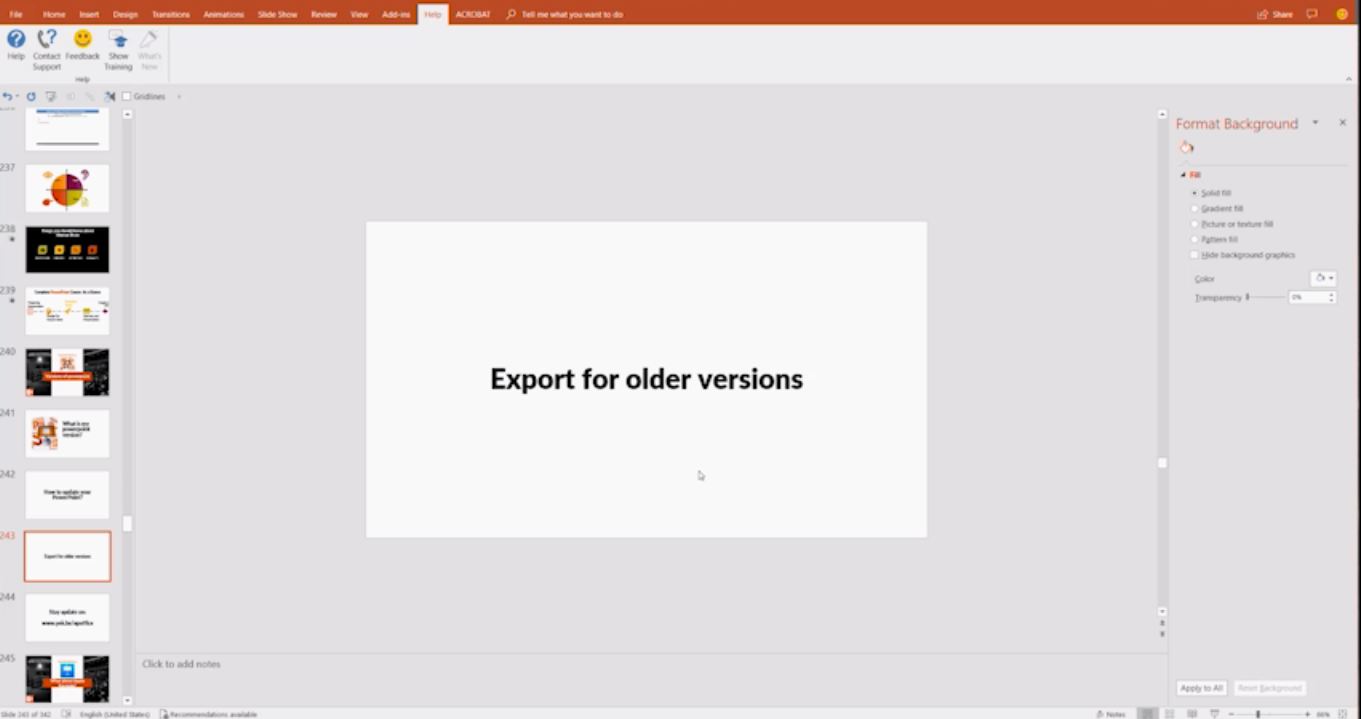 Everything about PowerPoint version

Old PowerPoint version format to a new one

Sometimes you’ve prepared the last version of PowerPoint  but you have to present it on the old PowerPoint version on another PC. Here, you need to get an output for an old power point. To do that just click on File, save as and in format tab you can see an option for 2003-2007 presentation which are old versions. Now I change its name to the old version and I save it the way I want. Now, this is an early version which will work on old systems too.

Most people ask this question that how can we know that a new version has updated? Because PowerPoint has provided us with lots of updates and changes within these two years and we want to know how to analyze this updates.

Here you can see what updates and changes are new in version 365, what privileges the insider members have and what functions have been added, what changes have been provided in September, June. It gives us a whole report about everything.

How to know my PowerPoint version?

We talked about modality. We
said some people might learn by seeing, listening, others by reading or doing. Generally, we need to know four things. First big picture. Second, memory, then learning and attention and finally learning styles.
Let’s review the whole course now. First, we learned how to prepare a presentation. Then we talked about how our brain works and the type that you have to design your presentation for it.

Now we want to start some technical tricks and lots of practical techniques.
After that, we’ll talk about the methods of presentation and Murphy’s Law.

Let’s start technical tricks now. One of the essential technical lessons is our PowerPoint version. Every version has its specific attributes and features. People used to work with PowerPoint before 2000. So it’s a good question that how can we know what’s our PowerPoint version? It depends on different versions but generally. In power point office 2007 and later we can go to File, Then Account. Here the version is written. For example, mine is Professional Plus 2016 and it has these licenses.

The way of gaining information about the PowerPoint version may be different from mine, so you can go to the Help and you can find out this basic info about your PowerPoint software.

Payam Bahrampoor
http://payamspeaking.com
I am an instructional designer! The one who loves to improve the quality of my life and others in a real sense. To achieve this goal, I am keen on using neuroscience to design cognitive interventions. I am pleased that since the establishment of +1 in 2012 we have used the slogan of being more effective than one single person to make the world a much prettier place to live.
Previous Post How to be a professional public speaker in 4 simple steps? Next Post What causes procrastination and a step by step guide to overcoming it?